Earlier this year in April mother and daughter hikers Carolyn and Rachel Lloyd went missing after attempting the Kapakapanui loop walk in the Tararuas. 5 minutes into this hike and I was starting to see why. The trail starts in the small rural town of Reikorangi near Waikanae on the Kapiti coast. It’s described as an intermediate challenging hike and has all the hallmarks of a typical rough and ready New Zealand hike – river crossings, dense bush and steep terrain.The track starts on private land and after negotiating the farm land and its friendly cows the trail crosses the river about 7 times before hitting the fork of the loop track. The cool water was like a painful ice cream headache for the feet. A party of three caught up with us and continued on across the river piggy backing the female member. Despite the obvious fact that this was rather dangerous for both the girl and her strong stead was the girl really convinced she would keep her feet dry?

Despite the obvious fact that this was rather dangerous for both the girl and her strong stead was the girl really convinced she would keep her feet dry?

We picked the clockwise direction wanting to get to the hut early on in the day while the weather was still good. The climb was easy going but the track is very overgrown. Once on the ridge the beautiful mossy forest completely obscured any view. We arrived at the aging and damp Kapakapanui hut after 2.5 hours, the DOC times given on the signs are surprisingly accurate. The food inventory left behind at the hut was impressive and included a nip of Napoleon brandy and a sliver of captain Morgan. I wasn’t so sure about the giant tub of hummus left behind though. Flipping through the intentions book back to April showed messages left for Carolyn and Rachel by search and rescue staff asking them to stay put at the hut if they had made it there.  The trail is not clearly marked in the river crossing section and  is extremely overgrown in parts. I wonder if Carolyn and Rachel went awry for this reason.

Many rivers to cross. Actually just the one but you have to cross it 7 times 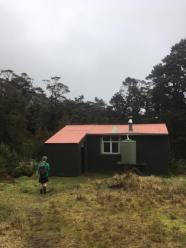 Walking into the clouds

Yup its a rough track

Pressing on to the summit the weather became increasingly colder and low cloud rolled in. I checked the weather report twice before we left and it was nothing but sunshine for the Kapiti Coast. We climbed to 1,000 meters and it became evident that we were walking straight into a mountain cloud with its own micro climate. The shelter of the goblin forest fell away to alpine shrub and tussock. Once on the exposed ridge the rain and wind picked up and we got the lovely addition of lots of mud. We caught up to the trio and they had clearly given up on piggy backing the female as the ankle deep mud had no signs of easing. The girl had clearly resigned herself to a new colour of shoe.

We made it to the trig before re entering the goblin forest and the steepness of the descent kicked in. We were grateful that we had chosen an easier ascent but weren’t to pleased about its knee crushing quality which we are still recovering from 3 days later. We had a few slips on tree roots and steeply set rocks on the way down. Paying attention was key and as we were forced to constantly watch the placement of our feet we missed the orange triangles more than once and were close to veering well off track. Each time mindfulness kicked in (“where’s the orange triangle?”) and we would retrace our steps until we found the correct path.We reached the fork in 3 hours. Once we were crossing the river again my nerves about doing the trail were gone and a deep feeling of confidence set in. We made it! The story of Carolyn and Rachel Lloyd were enough to make us think twice about doing this hike. Their story does have a happy ending though. After spending 4 nights in near freezing temperatures they were found safe albeit very hungry, tired and dehydrated. 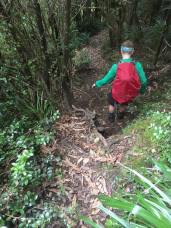 How to get down 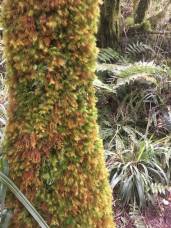 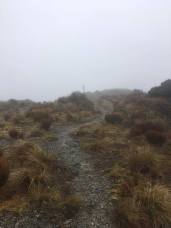 No view at the top

A message left for Carolyn and Rachel Lloyd