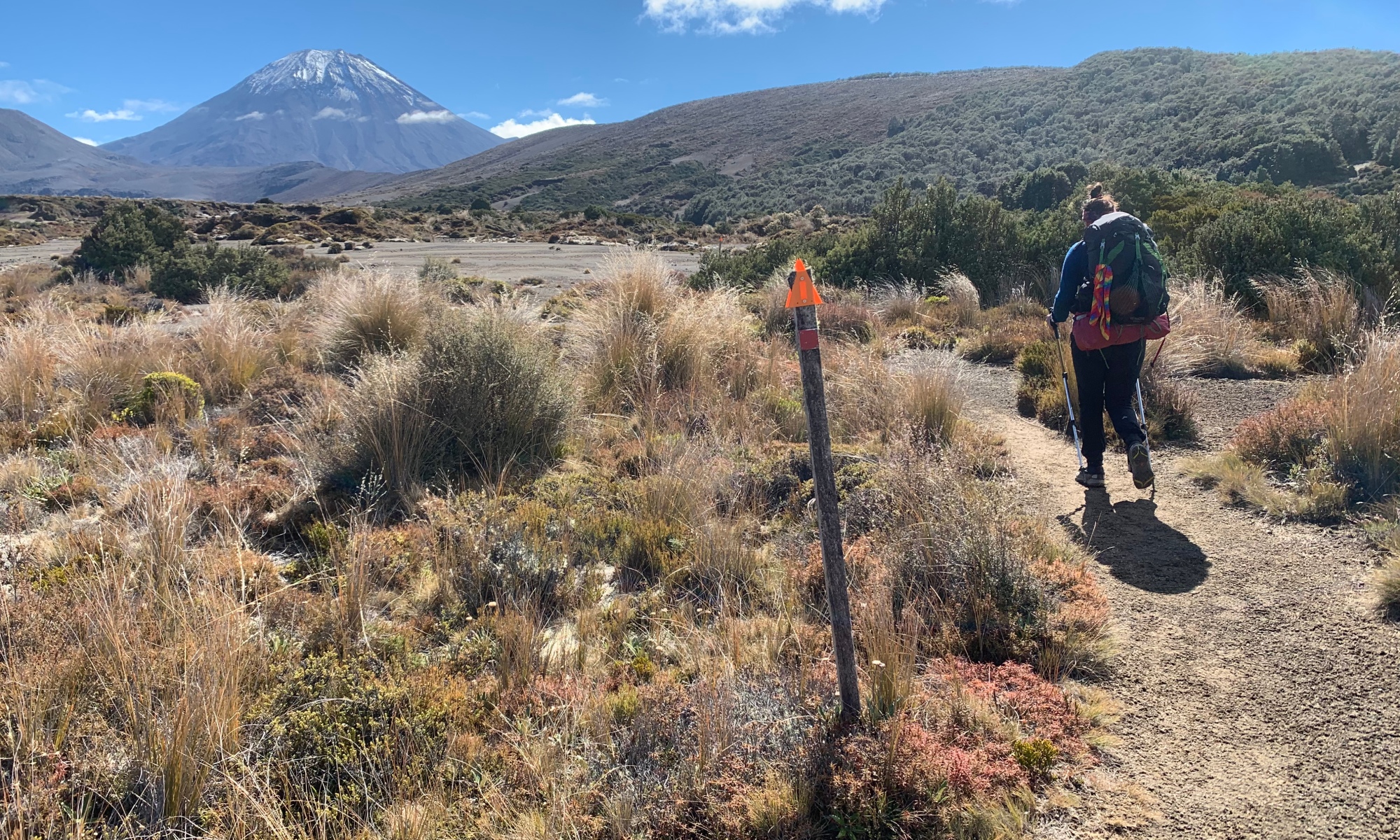 Round the mountain has been on our bucket list for a while. We had done sections of it previously, on Te Araroa in 2016, the Northern Circuit in 2015 and even an overnighter into Blyth Hut last year. It was incredibly tempting to veer off towards Whakapapaiti Hut while on Te Araroa a few years ago. We had spent the last week covering some challenging forests to get to Tongiriro National Park and were rushing through in two days to reach a booked canoe in Whakahoro. Logistics on Te Araroa can be tough but Jack and I have the luxury of living in New Zealand. So while its taken a couple years to get here, our timing is perfect.

At 8am we are at the Ohakune Mountain Road carpark with the sun rising at our backs. A chilly -1c but clear and calm. We are walking against the usual route—starting from the road end going anticlockwise. We will be starting at a higher elevation with our backpacks at our heaviest, smart! Through easy going beech tree forest we reach Mangaehuhu Hut with a perfect view of the slopes of Ruapehu, the chairs at Turoa ski field just visible. Onwards to Rangipo Hut the landscape changes once we enter New Zealand’s only desert. Dense lahar flows and scoria leave a barren valley shaped by Ruapehu’s multiple explosions. Ruapehu, an active stratovolcano, sits on a constant activity level of ‘1’ impressively waking every few years to remind us all that he’s still here.

Extended Childs pose on the deck of Rangipo Hut

We arrive at our first waypoint after 11 hours of tramping. Rangipo Hut, tucked against columns of dense volcanic rock a welcoming site at dusk. We bask in its empty interior getting a fire going in the wood stove. Night falls and the sun dips to a pink line on the horizon of the desert. The stars come out and the temperature drops. Every layer of clothing goes on and we sip tea in front of the fire stoking the blaze. A thud is heard on the hut deck and our heart sinks. Oh well, I guess we have to share the romance. Two bumbling men walk in declaring, ‘they’ve moved this damn hut on us!’. Much huffing and puffing is had while they stomp around in their boots. ‘Ahhhh we came all the way from Whakapapa village, ahhhhh. It wasn’t five hours. That was not five hours!’ One of them says before the other declares to Jack and I, ‘just so you know we aren’t paying for the hut but we are just gonna crash here’. Jack and I bristle and go cold. All welcoming smiles are switched off. If theres one thing that gives us the shits, its people who don’t pay for DOC huts. ‘Well,….’ Jack stammers, ‘You should be paying for the huts’. ‘Argh…well we can invoice DOC eh? We’ll sort it’. Invoice DOC? Jack and I just look at each other. One of the men sneezes and complains about his allergies. Each sneeze followed by a wipe of his nose on his grotty sleeve. After the eleventh sneeze and ‘ah farken allergy’s! Fark!’ I open my first aid kit and hold out a tab claratyne, a polite offering in the hope that he will be quiet.

Next morning we leave the hut early and make tracks towards Waihohonu Hut, a hut that is still in season to be pre booked being part of the Northern Circuit, a great walk. We have plans to camp nearby. Thirteen kids show up during lunch and thunder around hut bagging bunks for the night. The DOC ranger introduces himself and reminds us to take our rubbish. He looks tired already and  he only just got here, his first day in a fully booked hut. Its Easter/ANZAC week, a real silly season for the great walks. Its time to get going and we peel off the route towards Tama Lakes and find a spot for our tent amoung the tussocks nicely blocked from a wild southerly. We climb up the spur towards Upper Tama Lakes just in time to catch the moonrise by Ngarahoe. Wedged in-between the two mountains the powder blue sky whips cirrus clouds high above our heads.  I look down to both lakes then out in the distance spotting Taranki, a perfect pyramid. Legend has it several million years ago these mountains were all in one big cluster. Ruapehu and Taranaki fought cataclysmically for the love and affection of Ngarahoe. At seeing her lovers fight her tears filled the basins beneath her, the Tama Lakes. Ruapehu won the fight and Taranaki retreated west, separated from Ngarahoe forever. I tell Jack this story on the ridge high above the lakes to which they are disgusted. ‘Thats the most unfeminist story in the world, could she not decide for herself?’.

Two days into our hike and its town day. We are excited at the prospect of eating something that doesn’t have couscous or a spinach wrap as a base and make our way towards Whakapapa village after shaking the ice off our tent. The only thing available though is the Holiday Park shop. Most hotels stop serving breakfast at 9am. The cafe doesn’t open until 11am. Duly noted for the next hike. With each of our backpacks restocked with potato chips we cover the section we have walked once before on Te Araroa through beech tree forest and past the silica rapids of Whakapapiti River towards the hut. We pass by two hikers who tell us the hut was rammed last night and to ‘grab a bunk in the small bunk room’ if we can. We can and we do, arriving early. The hut fills up and two kids noisily fight about who gets the top bunk. Their parents have given up, ignoring them and they continue to squabble. We met Joleen and Steve, two yoga instructors based in Piha and share stories about tramping in the South Island. The shouting kids continue and we carry our conversation outside onto the hut deck, -5c but at the very least a little quieter.

Our final day is upon us and we spend it climbing and sidling around the exposed rocky beds of stone at the base of Ruapehu, crossing streams and descending to Lake Surprise. We meet another walker, Reece there. He’s doing loop after loop of the hike, this time clockwise. ‘Yeah, just gotta get rid of this puku’ he taps his belly. He’s a fit fella and I can’t see what he does but it seems like a fun way of doing whatever he’s trying to do. Jack asks him, ‘is it different everytime?’. ‘Oh yeah’ he says, ‘this bit…I mean I can actually see the lake this time. Last time the weather was shithouse’. Reece keeps climbing as we descend reaching the final hut for a quick lunch break before making our final climb back out to Ohakune Mountain Road. ‘Are those….are those waterfalls frozen?’ I say. We move towards the white water running down the Cascades, beautiful waterfalls spilling from the flanks of Ruapehu. No, the water is still following, the white rock stained by the silica deposits in the water. They look surreal and the icy blue falls and pristine pools below are enough to persuade us for a chilly dip. I put my head under several times, my heart rate going ballistic but I leave the water feeling brand new.

Waking up near Tama Lakes

The view at dusk – Whakapapaiti Hut

The sun dips behind the mountain and our hike comes to a close, just a few kilometers of road walking back towards the car. We reluctantly put our backpacks into the boot and on the way home a beardy man is on the roadside with his thumb out. Jack screeches on the brakes. He’s from Pennsylvania, a Te Araroa walker that finished his thru walk a few weeks ago. He’s steadily making his way back to Auckland before he has to head back to America. ‘I just wanted to fit this one in before I headed home’ he says ‘and the weather’s been great’.  I smile at him in the rear view mirror,  he’s right about that.