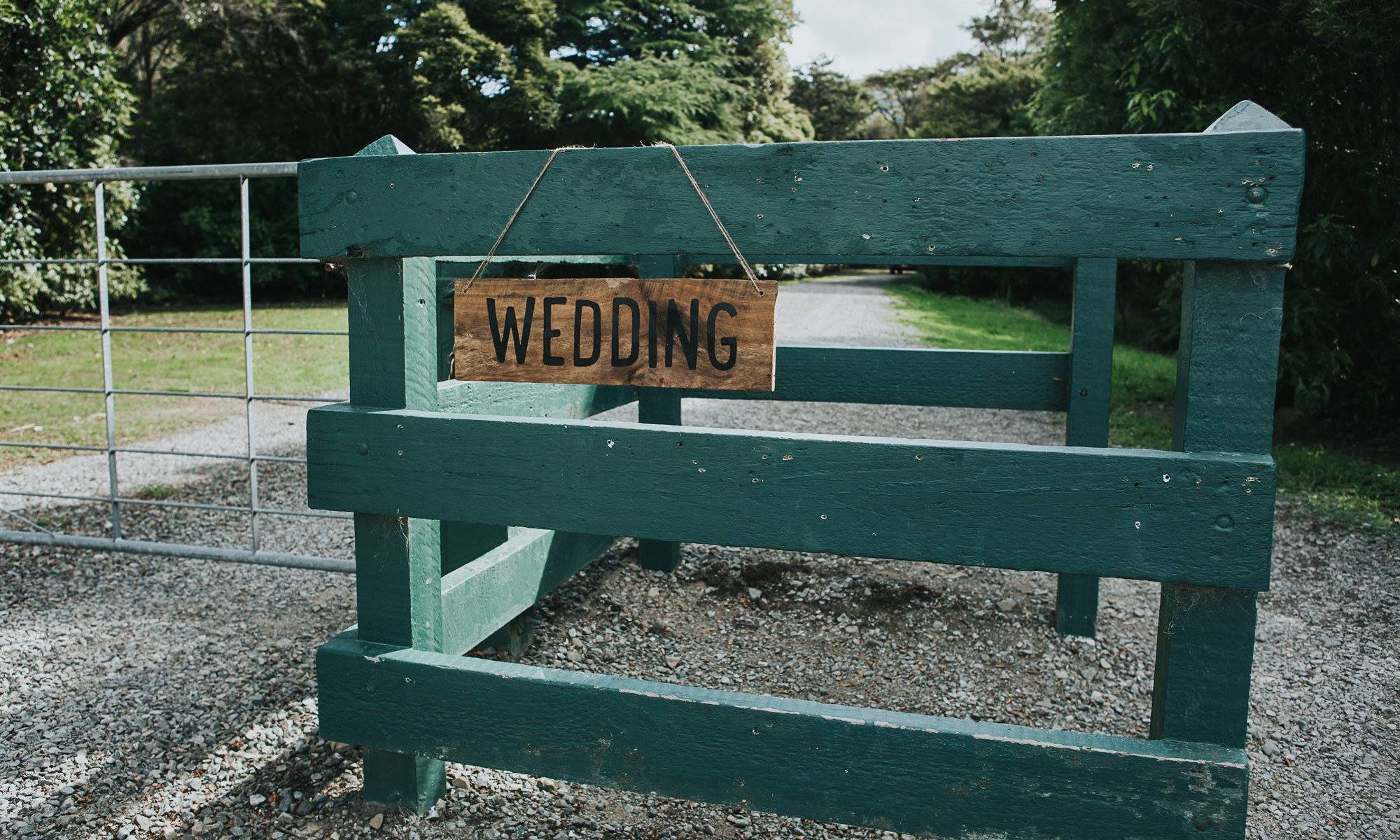 Thinking that you might do something similar? Perhaps ask yourself the following.

Is it too late to elope?

Nah just joking. Nah not really, is the answer yes? OK, you are in deep so maybe read on.

If you have been following this blog for a while you probably have noticed its been a tad quiet lately. Thats because Jack and I got married in March. Its been a crazy last six months for us and we have discovered that organising a wedding is an all consuming experience! Jack and I were married in one of our favourite places, Tararua Forest Park. Just north of Wellington, the Tararuas, is where I really cut my teeth so to speak on the tramping front. Its where I broke in all my gear, where Jack and I trained for Te Araroa and in its own right has some amazing tramps and huts to discover.

I needed to first convince Jack that Holdsworth Lodge, a lodge on the eastern side of the park would be the perfect place to have our wedding. Close to a road end, accessible by foot and tad nicer than most of your standard DOC huts. Theres mains power, flushable toilets and a heat pump. La dee da! At first it was a hard ‘no’ from Jack. In their own words — ‘that lodge looks like a public toilet block. The photos are going to be awful’. Harsh! But Jack is a graphic design who craves a good pic. I just needed to get their focus past the facade of the lodge and on to everything around it—the bush, the river, the accomodation for our guests and a beautiful swimming hole near where we could have the ceremony. The decision became easier after a few months of looking at alternative venues with extremely high price tags. Holdsworth Lodge was just over a 1K for three nights accomodation. Score! We booked while we still could and started planning, dreaming and of course spending. But plan and dream and spend as we might somewhere in the chaos we forgot that as swish as Holdsworth Lodge is, it is still DOC accomodation intended for a particular purpose. That purpose is tramping, not weddings as were soon to discover. 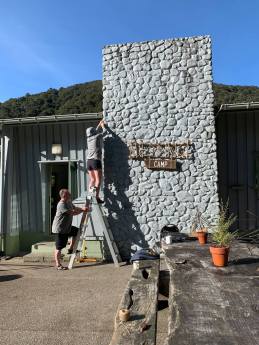 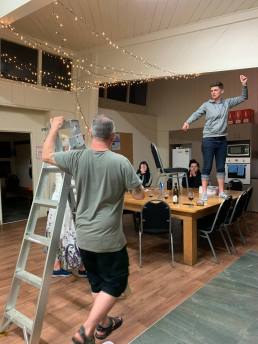 The helper bees hard at work 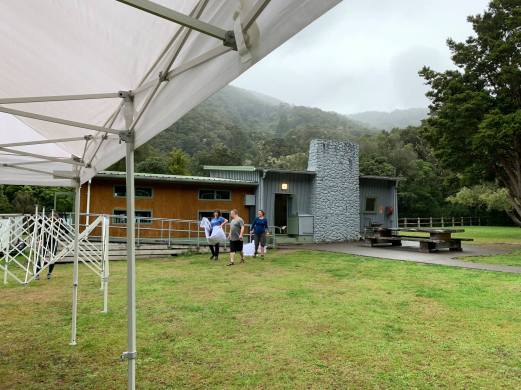 The weather is not cooperating!

We arrive at the park the day prior to the wedding to set up and decorate. Meeting with the caretaker it was clear that we had perhaps made an embarrassing faux pas.  ‘So the mattresses for Powell Hut arrived and I had to store them all in the lodge, sorry about that but there was nowhere else for them to go. We also got a new fridge for you fellas.’ That was the first thing the caretaker said to us. Obviously this wasn’t the end of the world but after 6 months of planning to me it might as well have been. This was confounded by the fact that on arrival at the lodge it was a zoo. Rain was coming down in sheets and a transit bus of school kids loitered under the awning, thirty wet kids blocking the front door. We ask them seven times to move out of the way while we cart in boxes of supplies from the car. Jack losing composure on the  seventh call. ‘We have asked you six times, six times! To move. You are blocking the door!’. The surly kids don’t move an inch. I look at one of the teachers who just ignores me and I imagine that spending her day with these jerks is enough to deal with. The kids stare at us opened mouthed as Jack throws their school bags to either side of the door while I balance a 50 litre box of lighting fixtures on my knee. This is a low point.

Had we forgotten that the park is a public place? No! But it was a wake up call to reality.  So too were the 40 mattresses crammed under the bunks in the main accomodation room. The ‘new fridge’ is a rusty kelvinator from the late 80’s complete with broken shelving on top of it.  This is when I start crying. Jacks right, this place does look like a damn public toilet block. Jack just tsks at my tears, ‘come on Bridezilla it will be fine’. We set about hiding all of this hideousness in one of the smaller bunk rooms, dragging mattresses back and forth and sliding the fridge along the floor trying hard not to put our backs out. We then discover there is no firewood, generally a staple in serviced huts and there goes the dream of a cozy indoor fire after the ceremony and a wood stack to hide the very large rat trap that is nailed to the side of the stone hearth. The school kids finally depart en masse leaving behind a trail of sandwich crusts, lolly wrappers and of course underwear. Why always underwear? I spend an hour cleaning up after them in the rain. One of the toilets clogs up, a shit smell emulating from the sceptic tanks, right where we will be having the wedding dinner but amoung the chaos a working party of friends arrives. They are amazing and there is no way the wedding would have ever happened if it wasn’t for them. They go to work polishing questionable looking cutlery and removing thousands of cobwebs. They set up lights, signs, marquees and decorations. They make a lodge that looked like ‘a public toilet block’ into something special and finally we got married, that was the easy part. But it went so fast that in the following days I couldn’t help but wonder, what the f**k was that?

After organising my own wedding I have a greater respect for all of the other amazing weddings I’ve been too. Theres so much effort, stress and sometimes tears. Weddings are crazy and generally become more about a community experience rather than something special about the two people getting married. Personally its incredibly hard for me to turn off ‘host mode’ so yeah, I did feel like I was ‘on’ all weekend long. I could have slept all week afterwards and I needed to but instead Jack and I were dismantling a venue and hosting guests that had come from afar. So I make a few simple suggestions.

1. Consider that venue that costs a bit of money (it may be worth it)

2. GO ON YOUR HONEYMOON STRAIGHT AFTERWARDS.

You are already tired, go away for a few days and see if you can meet with all those guests another time, even in a few days maybe? I would have loved our honeymoon tramp to come straight after  the wedding but it wasn’t meant to be. While this did happen eventually it took about five weeks after the wedding for me and Jack to really celebrate being married. And when we did it was so so so great. 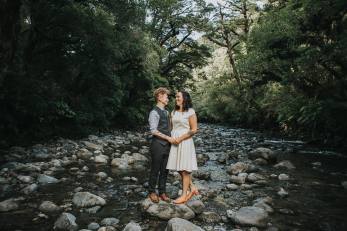