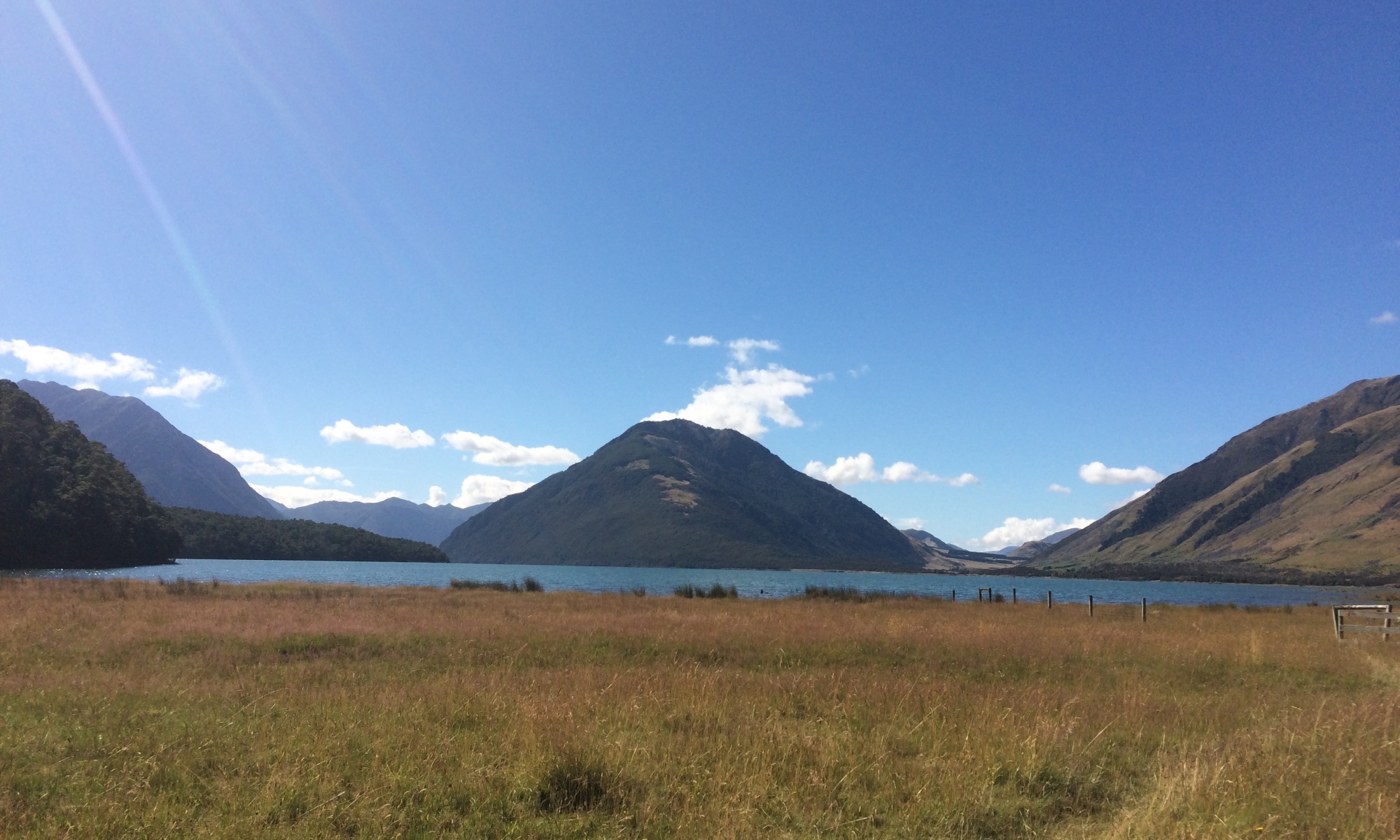 Charlotte walks quickly through the Matagouri Flats, she’ll be at the Lake soon and everything will be ok. A swift current washes over the smooth river stones and fills her ears with white noise, its all she ever wants to hear for the rest of her life. She doesn’t feel the exhaustion from the last few hours, she doesn’t feel anything but the heavy burden of the sixty litre pack riding on her shoulders. The backpacks sinewy limbs pinching at her spine and digging deeply into her kidneys as a pool of sweat gathers at her back. She sees a slither of azure through the thick tawai trees and instinctively ups her pace. Her calve muscles flex on the uphill crest and relief begins to wash over her but then there are voices. She freezes, the sweat on her forehead suspended in situ. Fuck. She thinks about leaping into the bush but its too late. She tugs her beanie down over her forehead instead as two figures in orange hi-vis vests crest the hill and look right at her.

“Well, hi there”
Charlotte coughs, feeling the lump in her throat thicken “Uh hi”
“I’m Steve” the tall one says smiling at her. He motions at the stocky man next to him “This is Dan, we’re from search and rescue”
Charlotte just stares at the ground, willing them away.
“Hey ahh…look we are wondering if you could help us. Can you answer a few questions for us?”
Fuck. “Um, i’m kinda in a hurry actually” she starts to walk away.
“It will just take a minute”
Charlotte looks at the trees “Ok fine but I gotta get….”
Steve assures her “Just a minute I promise. Shall we sit?”

Charlotte carefully places her backpack down against a tawai tree and sits on the ground with her arms wrapped around her knees. Steve pulls out a TOPO map and places it on the ground in front of her.
“So can you show us where you’ve been?”
She points toward the Jollie-Brook Circuit, the opposite way she came “I came from Gabrielle Hut”. The two men look at each other and Charlotte adds a defensive bluff “Check the hut book if you fellas don’t believe me”

The men look at each other again for a moment and Steve leans in “Hey can we get your name and a contact number?”
Charlotte leaps to her feet “Nah man, I gotta go. I gotta leave before it gets dark”
She turns her back on the men and lifts her pack from against the tree trunk, her eyes widening at the liquid red tinge over the tawai leaves. She casually drags her feet in a circle as she shoulders her pack ruffling the ground stain through the camoflauge of the earth before giving the search and rescue party a shrug “good luck with whoever you’re looking for”. She strides away looking over her shoulder, praying that they won’t follow her.

Its dusk when Charlotte reaches the lake edge. The mountains are mirrored on the surface of the water and she strips down to her underwear ignoring the pale red mess caked and dried over her thighs. She slowly wades in feeling the chill on her skin as she lifts the backpack in front of her like an offering. The blood orange glow of the setting sun is caught on the long strips of cloud arching overhead as she wades in deeper and deeper, holding the backpack tightly as it floods with water and begins to sink. A faint “Hey” shatters the quiet and Charlottes eyes fill with water. She forces herself to look toward the lake shore where  figures in orange hi-vis vests  wave at her, distant hands and long arms. She finally lets the backpack go, the straps running beneath her fingers before she feels a thud by her feet. There are whistles sounding and the distant roar of a boat motor but she just wants to hear white noise, a swift current washing over the smooth river stones.

Wāhine toa ~ girls trip! @pahtypeet
Ngā Rotopounamu. I mua atu ⚠️ Rāhui Feb 14-17 anō hoki mate 😔
Makuru~Abundance. Despite life’s ups and downs nature has no judgements and gives in abundance. Being taught how to harvest snow totarā berries by Marcell the hut warden at Waihohonu hut last night reminded me of the wonder that it is to have people walk into your life. Everyone is there to teach you something-about yourself, about them or about this world. When we meet that is Makuru~Abundance.
Mauri mahi, mauri ora; mauri noho, mauri mate (Do the mahi get the treats 😆) #festivalwork #kawaipurapura #raglan #pitstop
Kokomea roa kau ā mātou Maunga pūre 💫 🌕 ✨
Get your head under water, Cleanse it all, Start over 💧 (sorry-🍑) #waterishealer