Winding our way frantically through Mangaore road in the Honda Logo my mind started playing tricks on me. “Do my tyres feel flat”? I asked Jack. The ‘metal’ road that was described on the DOC website was not what I had envisioned. Gravel 4 x4 road would have been a more appropriate descriptor. We were late. We are always bloody late but we had made an ambitious 7:30am start from Wellington city and were now in isolated Tararua country. We would be in serious trouble if my trusty Honda started to flail.

The start and end of the track to burn hut is based by the Mangahao dams. The dams are located a short drive from the town of Shannon and the area is better known for the white water water rafting course by the Mangahao power station.

We were meeting friends at dam number 2 but stumbled across them at reservoir 3. Judging by the muddy state of their cars they were likely pondering the words ‘metal road’ also. We parked the Honda at dam number 2 then piled into one car and headed off to dam number 1. This helped us to avoid an hour or so walking along the road. Once we crossed the dam foot bridge there was no messing around as the steep ascent through scrub and forest gave us a sharp introduction to some tararua constants, mud and beech tree forest. An hour in we had reached college stream and we spent the next hour and half navigating the slippery rocks and occasional deep pools as we made our way upstream. 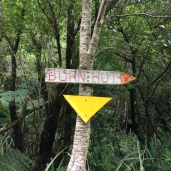 Up up and up

Stopping for a lunch break on one of the streams many rocky islands we enjoyed the sun and some cheese bagels. Starting to feel the chill on our wet feet we set off again scaling over some of the larger rock features. Sure footing is a must and our hiking poles were well used in this section. Lack of orange triangles was giving the group some anxiety and we were grateful to see the sparsely dotted directional orange triangles before reaching the 3 hour turn off fork to burn hut.

From the fork it was beautiful muddy and challenging grunt up to the ridge line. The steep climb under the bush canopy started to give way to a beautiful view of the Tararua ranges. The clouds were moving fast occasionally sheltering the bush line then suddenly giving way to excellent 360 views. We were now in subalpine tussock country working our way along the ridge. There had been extensive work done on the track with fresh evidence of chainsawing. We whoop whooped as we saw our humble abode, burn hut, perched on the spur in the distance. The weather had been excellent so far but the mud meant the track was still slippery. Hiking through the some of the small goblin forests we made a startling discovery of a skeleton. It was definately an animal and its perfectly in tact long skull suggested it was once upon time a goat.  The poor thing obviously had been stuck in the muddy bog for a while as its leg bones were wedged deep and there was not a single trace of anything else other than bone. Sidling around our discovery we descended to the spur with a few slips and backside thuds. About 200 meters from the hut grey clouds moved in and provided us with some welcome drizzle. 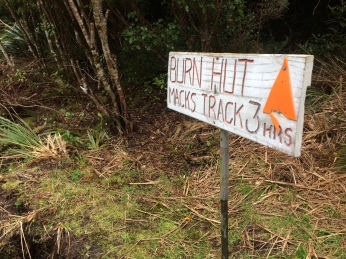 The long drop with a view

Our humble abode in the distance

Burn hut is a well maintained 6 bunk hut with an excellent indoor foyer area to hang packs and wet clothes. While there is no fire place the hut is pretty cosy. It also came with a squeegee to wipe of condensation from the windows so inside dwellers can enjoy the view. The rain started to set in and it appeared that we had made it to the hut just in time. The last entry in the intentions book had been a week ago and within the books stainless steel case etches from 1981 told brief stories of hunting trips and success with goats and pigs. We relaxed in quiet luxury enjoying the view of the mountains. As the sky turned dark we could just make out the lights in the distance as the town of Shannon. Although we had hiked up with the MSR just in case the hut was busy no other hikers arrived so we were in the lucky position of having the hut to ourselves. Becoming a little chilly we started the long night of 3-4 course meals with hot soup. After a few wines, and for the friends from Palmerston North a few Woodstocks, we feel asleep to the hard pitter patter of big rain drops on the huts tin roof.

The track was extremely boggy and overgrown. A thin line of mud and orange triangles was the only way forward

Waking early to heavy rain we took our time with tea, coffee and even some banana pancakes.  As the rain softened around 8am we set off from the hut. It was immediately clear that while much work had been done on the track on the way up from dam 1 much was left be desired heading down to dam 2. The track was extremely boggy and overgrown. A thin line of mud and orange triangles was the only way forward. Ankle deep  mud and flax would occasionally trip us up and I was grateful for the leggings I put on that morning in defence of the vast onslaught of cutty grass. Working our way over the ridge we caught our first view of the ocean. Manawatu river snaking out to Foxton beach was in plain sight while the copper red and brown tussocks dotting the Tararua ranges either side of us framed the landscape beautifully. Moving out onto a better maintained track the rain lifted. Lining our path was an abundance of Tupare (leatherwood) which we were carefully not to touch as their saw toothed edges were impressively sharp. 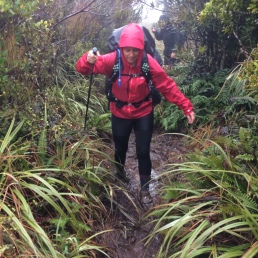 Our ridgeline dropped back into dense silver beech tree and goblin forest. The track suddenly became increasingly steep and we took our time navigating some difficult terrain. The slippery tree roots and mud demanded our attention and drifting off only  caused trips and falls. The track narrowed as we hit the river and slowly the unmistakable sound of a thunderous dam was within earshot. Looking back we noted that the terrain we just walked down was steeper than it felt. Peeling off our muddy wet shoes and gaiters we were grateful to know that beyond the winding metal road was a land of toasted sandwiches and flat whites.