We were an hour into our return journey from Waiorongomai hut and that’s when it happened. The words escaped my mouth faster than I could process what I was actually saying which for the record I believe was “no, oh no oh god, oh god noooo!” I’m not a religious person but seeing the swift river carrying away my fizan hiking pole was enough to apparently turn me, or my mouth in this case, into a convert. We had just scaled down a steep rocky section into a deep river pool which brushed the tip of my shorts. I was so distracted finding my footing in the deep dark pool that I had neglected to place the pole strap back around my wrist after climbing down from the trail. The crossing was one of 17 that we did along the Waiorongomai river valley to Waiorongomai hut. 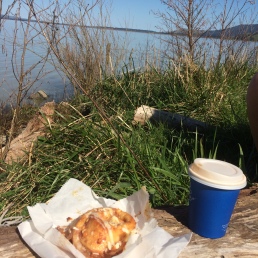 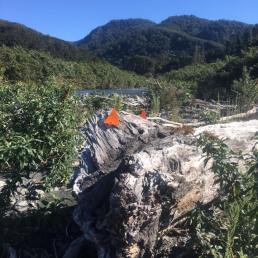 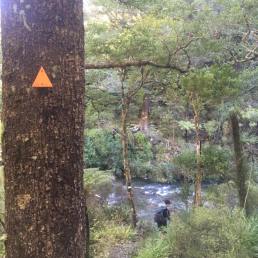 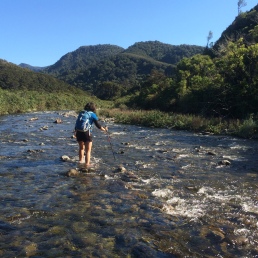 Starting from the Western Lake road entrance at Waiorongomai station we entered the working farm owned by the Matthews family and drove to the paddock end where we spotted a lone stile and an orange triangle marking the beginning of the track. Less than 5 minutes in we were at the river edge taking on our first icy crossing. 5 minutes later we were struggling to find the next orange triangle and by the sparseness of them along the river you would assume they were a million dollars a piece. Although the logic seems simple,‘follow the river’, it’s easy to assume that surely this much of the hike can’t be wading up stream but alas it was. We were grateful that the weather had improved from that week and the sun was bright and warm. It was not high though and we did not have time on our side. We had a lazy Sunday morning and on the way to the Station had made a mandatory stop at Everest cafe in Featherston taking our flat whites and brioche pastries to the water’s edge at Lake Wairarapa before heading out to our hike. We started at 1:30pm expecting an on trail 1.5 hour hike. We had basically picked the hike by looking at a map and finding the fastest marked time. We neglected to read a track description and this lack of foresight came to play as we approached a terraced section of the river that was rapidly running into several braided sections.

The water was swift and nothing but white wash

The low winter sun and its glare on the surface water made it difficult to see the slippery rocks that lay beneath. The water was swift and nothing but white wash.The large orange triangle hammered predominantly on the tree on the other side of the river was teasing us. I waded in first and immediately felt the rushing water pick up my hiking poles. I didn’t hesitate and lifted them up to stop the drag as I firmly braced myself against the current. I made it mid way to a small island in the middle of the river grateful for a pause. I turned to see Jack looking very worried I could just make out over the white noise “I’m nervous” I guided her over saying “keep your poles up and keep your feet strong”. Jack made it over slowly and we continued on to the orange triangle and up to the first grassed part of the trail grateful for the reprieve of solid ground. After a brief stroll through nikau palmed forest we crossed the river several more times and hiked two long stretches upstream. 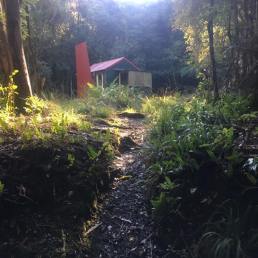 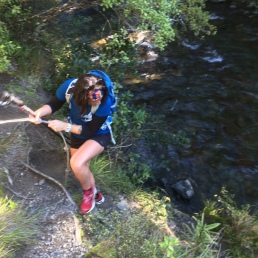 Heading into the river 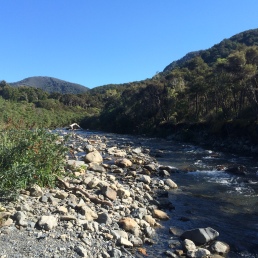 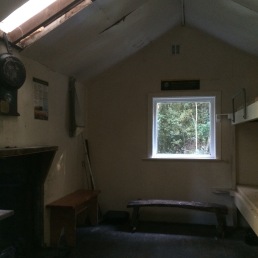 Inside the rat den

Nearly two hours in and losing sunset we agreed to a turn around time of 4pm. If we left it too long we would end up wading down the river in the dark. We picked up the pace really wanting to make it to the hut. There is nothing worse than not making it to a planned point. The mind and body can both be surprisingly stubborn and I know that one day this kind of behaviour will get me into trouble. Worse still the hut was marked 105 meters on our map and Jacks Suunto traverse was only reading 83 meters. I couldn’t see the trail gaining anymore altitude. We hit a corner and there it was. Either the Suunto traverse or the map is wildly inaccurate. The basic hut that is Waiorongomai is incredibly cute but as we were about to find out best enjoyed from the outside.

Sliding the lock of hut door to the right butterflies entered my stomach. As much as I love the backcountry huts of New Zealand. Some of them can be a bit creepy and I always worry about stumbling across something unsavoury. The hut was of course empty and as I entered the hut that’s when I heard it. Heavy scuttering in the roof. Either a rat the size of an elephant or a large extended family of rats in the roof had just become acutely aware of our presence. I backed off immediately cursing my fear of rats that was instilled by my mother who had read a particular George Orwell book way too young. The rats continued to scuttle about and I hoped they weren’t about to make a mass exodus through the gaping hole in the ceiling. The hut stunk of rat piss and the mattresses were covered in their shit along with black mould. I plucked up the courage to make a dive for the DOC intentions book. There had not been an entry since the 28 August. Maybe the hike is not a favourite due to all the river crossings? Or maybe the hut rats? That would explain why we didn’t see a single person the whole day. Most people who had made entries had come in for the day or made it over from the Waiorongomai saddle via Orongorongo river. I wrote the fastest entry in an intentions book that I had ever written commenting on the mammalian critters and their heavy presence before throwing the intentions book back in the holder and bailing. We were at the hut for less than 5 minutes before making our way back to the river. 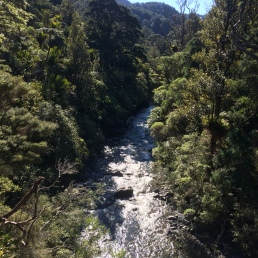 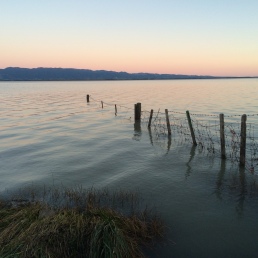 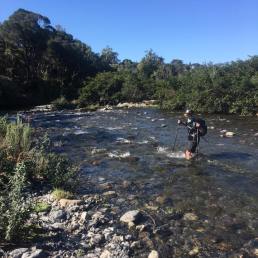 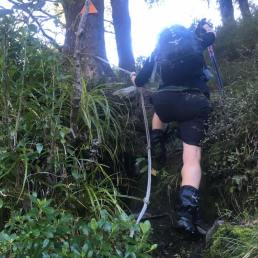 A bit of climbing

Stopping in a sunny spot for a sandwich and scroggin gave us the energy to make our way back. Heading down stream with the current made it a faster exit as we literally were ‘going with the flow’. But as we raced the sunset our feet were becoming numb and frozen. As my attention was diverted to the discomfort in my feet this is where I lost my hiking pole. After my surprising ‘oh god no’ admission I threw myself in the pool trying not to lose sight of it. As my pole drifted down stream it appeared to get caught up in the current. Jack was still above me on a rocky outcrop and was already dangling her pole down into the river. In the most badass fisherman style move i’ve ever seen Jack effortlessly scooped up my pole from the current by looping the floating wrist strap through her hiking pole end. “Yes!, nice work babe”! I exclaimed happy to be reunited with my pole. Jack still had a go at me for not having the wrist strap on in the first place which was fair enough.Keeping our pace up the sun started to set on the final sections as its final golden sliver sat on the horizon. We made it back to the car just before 6pm. It was quite possibly the longest and wettest 10 kilometer hike we have ever done. Leaving Waiorongomai station the pink hue of sunset painted the sky around the lake as we made our way back to Wellington. 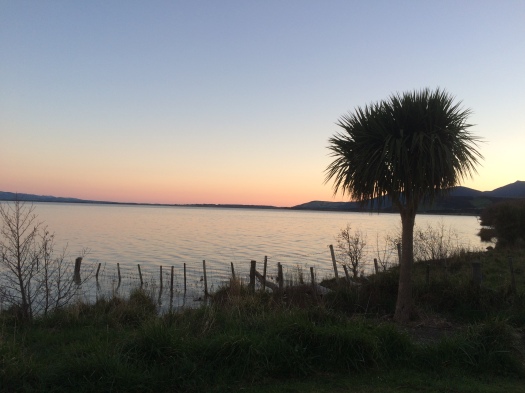