Battle Hill Forest Park located on the Kapiti Coast obtained its name from what most historians describe as a ‘confrontation’ in 1846. The ‘confrontation’ may be better described as a disturbing example of colonisation between Government forces and around 300 Ngati Toa, lead by Te Rangihaeata, who resided in the Horokiri Valley – what is now known as Battle Hill Forest Park. The battle took place at the temporary Pa site were the Ngati Toa placed themselves at the vantage point of the summit  where we would be walking to today. The Government forces lead by a Governor Grey were attempting to acquire land for European settlers and when Te Rangihaeata refused to sell up Governor Grey thought it would be appropriate to kidnap Te Raupararaha, Te Rangihaeata’s ally, from his Pa in Plimmerton and attack the Ngati Toa. After the battle which lasted for four days on and around the summit Te Rangihaeata left the region travelling north to Levin and living the rest of his days in exile. Unable to reclaim his land Governor Grey’s vision of European settlement became a reality.

Fast forwarding to 1860 the land was bought by the Abbott family who unfortunately like most European settlers in New Zealand at the time cleared all of the native bush and used the land for cattle. While Battle Hill is still a working farm to this day with goats, cows and large recreational area for horse riding, the land is now owned and maintained by the Greater Wellington Regional Council who are working tirelessly to regenerate native bush. Our initial walk through the well maintained campsite and gravel road also passed by a lovely fast flowing river. Adjacent to the river we climbed steadily through beautiful regenerated bush which included kawakawa, beech trees and very friendly piwakawakas (fantails). Leaving the bush and climbing up to the summit the path diverted to farm land which were very muddy with lots of cow shit! There are lots of cows here and they can give you a fright as they like to hang out just by the trail. Heading up to the summit we had some great views of the valley considering the weather was very average. It was incredibly windy up the top and a little bit scary as we were close to getting blown off a few times. The few sheep up the top did not seem perturbed in the slightest. Making our way down we had good views of the park facilities and on reaching the base we explored the old cottage which is now the park ranger hut. Nearby is a stream with friendly, ‘tame’ eels as the sign says, but unfortunately they weren’t out when we visited. Surprisingly these naturally nocturnal creatures show up during the day as I think the park ranger feeds them. Check out the video here: https://www.youtube.com/watch?v=aNhD7y9FAlk 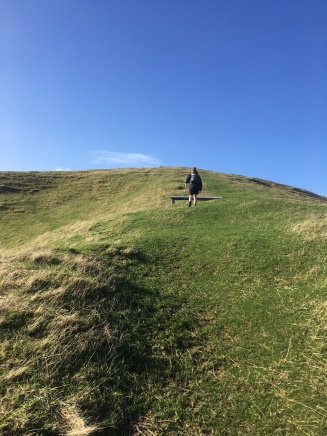 We explored a little further around the streams and the horse riding area. Surprisingly the park was very quiet but it is the middle of winter. I imagine the campsite is popular in summer as it’s so accessible from the city. Its also one of the only campsites i’ve seen in New Zealand with purpose built fire pits.  While the parks historical past is chequered it is an excellent destination for a day walk and the information plaques give incredible accurate and detailed accounts of the battle and its aftermath.

Battle Hill Summit is an easy drive from Wellington to Pakakariki Hill Road. One of my favourite driving routes is from State Highway 1 through Haywards Hill Road (aka highway 58). If you like a scenic drive not far from the city pick this one.  Battle Hill Forest aside there is quite good day walking around these parts including Belmont Regional Park and Porirua Scenic Reserve. On the way to Battle Hill you’ll go through the very sweet town of Pauatahanui. Stop here for a coffee and there’s also the Pauatahanui Park directly behind the town. Excellent if you like wetlands and bird spotting.